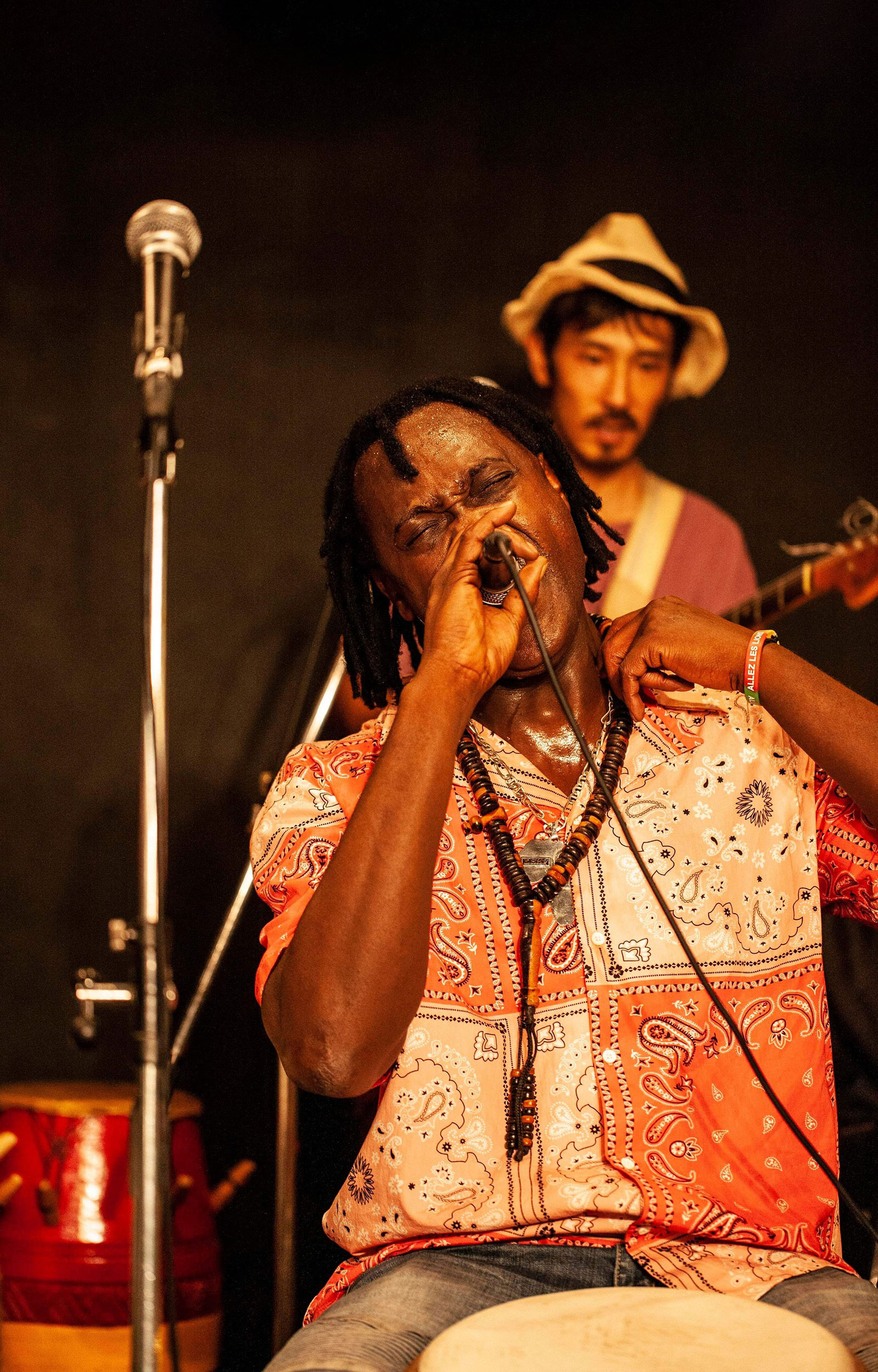 Tokyo International Conference on African Development (TICAD), Government of Japan – Tokyo, 2019 Performed at a commemorative banquet hosted by Prime Minister Abe in the presence of Their Majesties, the Emperor and Empress.

In 1998, Latyr Sy co-starred with Ikue Asazaki (Amami folk song singer) in Cuba. Before coming to Japan, he performed at a welcome ceremony for VIPs from around the world, including Prime Minister Margaret Thatcher, President Mitterrand, President Nelson Mandela, and John Paul II (Senegal).

Kazunori Kumagai (Tap dancer, chosen as one of the “100 most respected Japanese in the World” by a 2019 Japanese edition of Newsweek)

Participated in recording as a support member.

Participated in recording as a support member.

Latyr Sy was born on September 12, 1972, on the island of Goree, a world heritage site off the coast of Dakar in Senegal, West Africa. He began playing djembe at a young age. He soon gained recognition for his extraordinary talent as a percussionist. He made his mark initially in Senegal at official VIP ceremonies for dignitaries such as Nelson Mandela, Margret Thatcher, France François Mitterrand, and Pope John Paul II.

Immediately after arriving in Japan in 1995, he performed with Noh musician Shonosuke Okura in Beijing, Tianjin, Dalian, Harbin, and Shanghai. In 1998, he traveled to Cuba with Ikue Asazaki to perform at a 100th Anniversary Celebration of Japanese Immigration to Cuba. In 2000, he also visited France, Germany, and Egypt for a tour organized by Hayashi music performer and percussionist Kiyohiko Semba.

Soon after performing with Mannojo Nomura (Kyogen performer) at a concert held in the Republic of Korea in 2002, Yo-yo Ma invited them to the Silk Road Festival in Washington. D.C. The event was opened by former U.S. Secretary of State Colin Powell at the Smithsonian Center for Folklife and Cultural Heritage. He has also performed in Ethiopia, Kenya, Djibouti, and Vietnam with renowned artists such as YAS-KAZ (Percussionist) and Kaiji Moriyama (Dancer) for performances organized by the Japanese government’s Agency for Cultural Affairs.

In Japan, he has performed onstage with big-name artists such as Takako Shirai, ORIGINAL LOVE, and Naoto Inti Raymi. In August 2019, he solidified his position as the best African percussionist in Japan after being invited to perform at an official dinner attended by the Japanese Emperor and Empress and hosted by Prime Minister Shinzo Abe during the TICAD IIV meeting.